By The Unsaintly Queen, Lisa VasquezFebruary 25, 2018 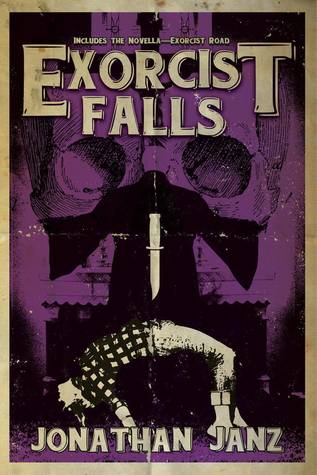 Chicago is gripped by terror. The Sweet Sixteen Killer is brutally murdering young women, and the authorities are baffled.
When the police are called to an affluent home in the middle of the night, they learn that a seemingly normal fourteen-year-old boy has attacked his family. The boy exhibits signs of demonic possession, and even more troublingly, he knows too much about the Sweet Sixteen killings. Father Jason Crowder, a young priest assigned to the case, must marshal his courage in order to save the boy and the entire city from the forces of evil.

But this is a darkness mankind has never encountered before. It craves more than blood. And it won’t rest until it possesses Father Crowder’s soul.

I started EXORCIST FALLS because Jonathan and I have an interloping circle, and when I saw he’d written a book about Exorcisms-one of my favorite genres to read-and was also from my hometown of Chicago … I knew I had to give it a go.

I was not disappointed in any way. In fact, I was proud of my fellow Chi-town author for a well told and frightening story. Small details of Chicago filled every part of the tale, and brought a sense of nostalgia and history only someone who grew up, or at least lived for a quite some time, in the city would know. Mentions of the “Killer Clown”, John Wayne Gacy, Wrigley Field, the Blackhawks, and Rosemary Road, gave this story the ironclad validation of being a true Chicago-based horror.

Every single character was so well developed, I felt like I knew them from the old ‘hood and stomping grounds. Vivid details allowed me to feel, hear, smell, and recreate everything in my mind. I’m not ashamed to say it gave me some wild dreams. The scene where Father Crowder is cornered by the spirit in Casey’s room is my favorite part, and the suspense was in perfect pace with the creep factor. Well done. I went back and read it again, just to savor it.

The story leads you into several different directions while you play Sherlock Holmes, deducing from the suspects presented, who the real killer is. At the same time, there is a moral reflection to be had in this book. Is evil really evil? Are people who do evil able to be saved? Can someone who is evil do good?

Jonathan is a talented writer who weaves a world of horror around your neck like a rosary, leaving you with nothing but faith to get you through dark, twisted tunnels. I’ll definitely be reading more of his work. I’m not really one who likes to compare authors to others, even though I understand it helps establish style when recommending them. Some have compared him to Steven King, but I have to disagree without devaluing Janz’s writing skill. He’s closer to William P. Blatty, in my opinion, not only for subject matter, but for his classic writing style.

To find out more about the author, please visit his site: http://www.jonathanjanz.com