By The Unsaintly Queen, Lisa VasquezFebruary 19, 2018 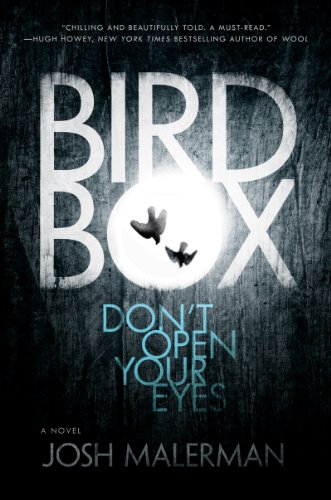 Written with the narrative tension of The Road and the exquisite terror of classic Stephen King, Bird Boxis a propulsive, edge-of-your-seat horror thriller, set in an apocalyptic near-future world—a masterpiece of suspense from the brilliantly imaginative Josh Malerman.

Something is out there . . . Something terrifying that must not be seen. One glimpse and a person is driven to deadly violence. No one knows what it is or where it came from.

Five years after it began, a handful of scattered survivors remain, including Malorie and her two young children. Living in an abandoned house near the river, she has dreamed of fleeing to a place where they might be safe. Now, that the boy and girl are four, it is time to go. But the journey ahead will be terrifying: twenty miles downriver in a rowboat—blindfolded—with nothing to rely on but her wits and the children’s trained ears. One wrong choice and they will die. And something is following them. But is it man, animal, or monster?

Engulfed in darkness, surrounded by sounds both familiar and frightening, Malorie embarks on a harrowing odyssey—a trip that takes her into an unseen world and back into the past, to the companions who once saved her. Under the guidance of the stalwart Tom, a motely group of strangers banded together against the unseen terror, creating order from the chaos. But when supplies ran low, they were forced to venture outside—and confront the ultimate question: in a world gone mad, who can really be trusted?

Interweaving past and present, Josh Malerman’s breathtaking debut is a horrific and gripping snapshot of a world unraveled that will have you racing to the final page.

BIRD BOX by Josh Malerman proves how important having a good cover is. I choose to read his book by the look of his grungy, but simple, cover.

I’ll be honest, I didn’t know the author was before this book came out but when I began reading it, I couldn’t put it down and added him to one of my favorite authors.

This is the kind of horror I love.

The story unfolds in a slow, peeling of details-none of which give away too much-until you find yourself sliding blindly into dread inducing scenes. Reading this story I was brought back to my childhood around the age of five or six. The moment of heart-racing fear as I stood, peering into the darkness of my room. I knew my room back and forth in the light. In the dark, it became strange and unusual with shadows forming creatures the moonlight would animate until I was convinced … there were creatures all around me of supernatural origin.

“The children were asleep under chicken wire draped in black cloth down the hall. Maybe they heard her moments ago on her knees in the yard. Whatever noise she made must have traveled through the microphones, then the amplifiers that sat beside their beds.”

This scene from the first page, is creepy and curious on its own but then …

“The walls are dirty. Dirt from the feet and hands of the children. But older stains, too. The bottom of the walls in the hall is discolored, profound purples have dulled to browns over time. These are blood.”

Malerman knows how to tease your curiosity and lead it down a rabbit hole. I had no idea what to expect next until I turned the page. Was it supernatural? Was it a person? Why were the kids in cages?

The level of story telling from cover to cover reminded me of Hitchcock with his blend of every day normal, mixed with a profound “strange”. When it was all said and done, I sat in silent reflection before I could put together my thoughts. I saw everything in my mind, and yet, there was enough left to imagination for it to plant a seed and grow.

In this world, everyone is blindfolded in some way. According to a “Russian Report” people have turned on one another in unexplained acts of violence. A very reminiscent plot to THE HAPPENING, except now we’re adding the variable of being in a world with these crazy events without one of your most used senses … your eyesight. Navigating a home or a small enclosed backyard is difficult enough. Being completely blindfolded as you try to navigate yourself and two small children past the familiarity of your home into a boat … is terrifying. Marry the thought of protecting your children with the thought of being unable to see what direction danger will come from, and you have the perfect scary story.

What I loved the most about the book is feeling the suffocating anxiety each of the characters experienced as if I was there with them … I felt as if I was blindfolded, too, even though I was reading the words with my own eyes. As a mother, I empathized with Malorie whose love for her children forced her to make choices she never might have made in a “normal” world. Raising children is hard. Danger lurks everywhere. They could be kidnapped, hurt, or worse. Removing the ability to see danger, perhaps avoiding it, would probably be my worst fear.

This being my first review on my blog, it was a no-brainer. I know and work with a lot of authors. It was no easy choice for me. Each voice has its own talent. I narrowed it down by choosing to begin my book reviews with an author I don’t work with on a daily basis.

As my luck turned out, I got to work with Josh Malerman on the anthology, PRIMOGEN: ORIGIN OF MONSTERS where you can find his short story, BASIC SHADE, along with original artwork by Greg Chapman.  I strongly urge you to read his work. His mind is a long, dark tunnel into strange and wonderful things.

ABOUT JOSH MALERMAN
Josh Malerman is an American author and also one of two singer/songwriters for the rock band The High Strung, whose song “The Luck You Got” can be heard as the theme song to the Showtime show “Shameless.” His book Bird Box is also currently being filmed as a feature film starring Sandra Bullock, John Malkovich, and Sarah Paulson. Bird Box was also nominated for the Stoker Award, the Shirley Jackson Award, and the James Herbert Award. His books Black Mad Wheel and Goblin have also been nominated for Stoker Awards.

To have your book reviewed please visit:
http://www.unsaintlybook.wordpress.com/reviews